It’s a big election year, and Elephant and Donkey are pandering for votes. “Hey you! Yes, you with the great hair and that dazzling smile,” says Donkey. “[I]f you pick me, I’ll give you peanuts!” promises Elephant. But it doesn’t take long for the candidates to forget about the voters and turn on each other (“Elephants don’t stink!” “Well, you certainly do, you big, stinky pooper scooper”), resulting in both figurative and literal mudslinging. Unlike some grown-up candidates, Elephant and Donkey repair their friendship—just in time to realize that the voters have already moved on. First-time author Clanton renders his battling duo in the pencil-like grays and blacks of classic editorial cartoons (Donkey almost always appears on the left against a blue background, while Elephant is on the right against red). Even readers unfamiliar with the political process will understand the demands being made on their loyalty. For children getting their first taste of presidential politics in 2012, this is a worthwhile testimony to the current state of political discourse. Ages 4–8. Agent: Marietta Zacker, Nancy Gallt Literary Agency. (Apr.)

What does it say that the nature and quality of our national political debate should be so baldly captured in a book for 4-year-olds? Newcomer Clanton's candidates are a donkey and an elephant, economically if emotively drawn on fields of blue and red. Yes, we know who these characters are, even more so when they start to address the reader, aka the potential voter. First come the soft sell, the loopy promises and idle boasts—"Do you like CANDY?" "I'm a SUPER CUTE elephant!"—then come the ad hominem attacks: "Well, you certainly do, you big, STINKY pooper scooper," or, drawing from Spiro Agnew's playbook, "belching beast of burden." Finally, they sling enough mud that the electorate takes its business elsewhere. It is a painful point well made, that these candidates are laughable when not plain embarrassing. But even if the name-calling has a measure of low humor at first, it soon pales—something that Clanton's book threatens to do before its neat twist—in direct proportion to its sustenance on either the entertainment or intellectual front, as any 4-year-old will tell you. Read it with Eileen Christelow's splendid Vote! (2003) if you want that 4-year-old to actually learn anything, though.  An ever-timely message, told in (two) primary colors. (Picture book. 4-8) 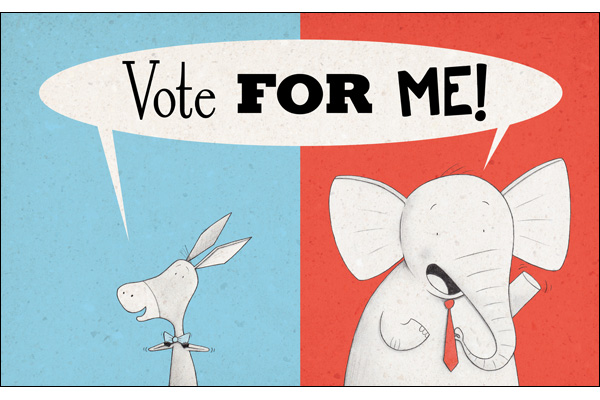