I thought for this 'sketchbook saturday' I'd share some of the sketches and doodles I did when working on my latest picture book MO'S MUSTACHE. After all, it is Movember! (The preferred month of both mustaches and monsters.)

MO'S MUSTACHE actually started out as MEEP'S MUSTACHE. It was a comic I made for the kids when I worked at Kids Club in Seattle. The comic was inspired by the paper mustaches I'd wear and pretend were real. It was a favorite sport at Kids Club to try and rip my mustaches off. I, of course, informed the kids that it was impossible to rip off my mustaches because they were real (or at least REAL-ly awesome). 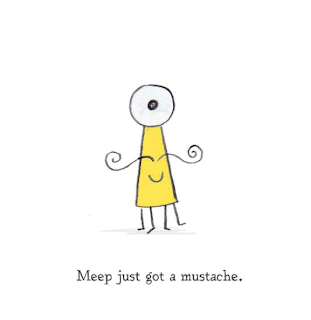 As you'll see Meep looks a lot different than Mo. After the book was picked up by Tundra, Meep went through a number of changes. For starters, the simplicity of the character design was just a bit too simple. I found that my youngest readers had a hard time with his form. They found the single eye a bit confusing (especially whenever the eye was closed). Secondly, the name 'Meep' turned out to be problematic. I was informed by a kid that 'Meap' is the name of an alien-creature on Phineas and Ferb and that he happens to sport mustaches. Quite the coinkydink! So I had to say goodbye to Meep.

And go back to the drawing board. I drew oodles and oodles of monster-things to come up with a replacement for Meep. 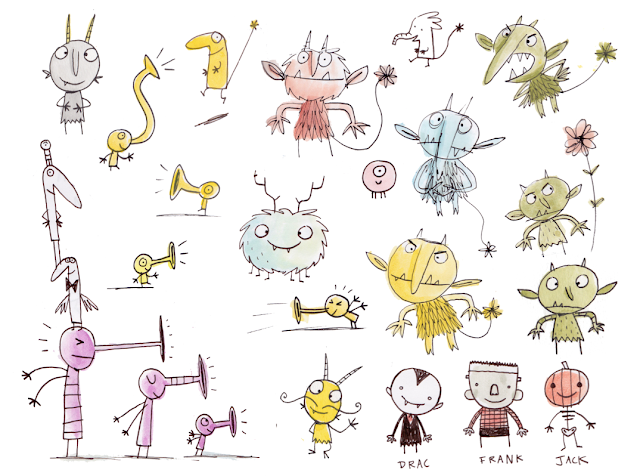 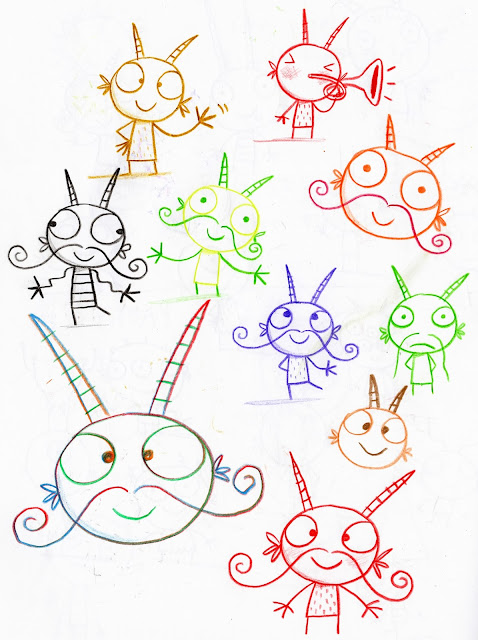 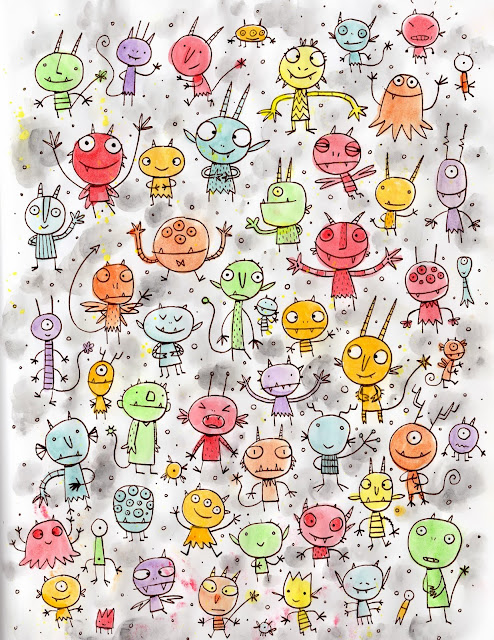 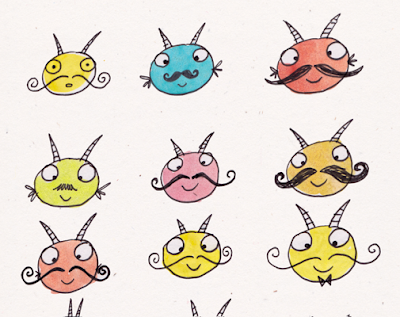 I tried out a number of new names for Meep. I remember Mojo and Momo were two of my favorites, but in the end Mo seemed like the most fitting name.

As for the character design, I thought the oval-headed Mo (above) was the way to go for awhile. But while I liked the character, the shape didn't quite emphasize the mustache in the right way. Below are a couple of examples of what I sent my editor (Tara Walker!) when I was working out Mo's design. You'll notice I kept the former Meep design around for the characters Bob, Bill, and Ben. I also tried out a new version of the Meep design for Mo. Two eyes instead of just one! I thought it was a funny looking character, but then my wife pointed out that the shape could be seen as a little bit awkward. 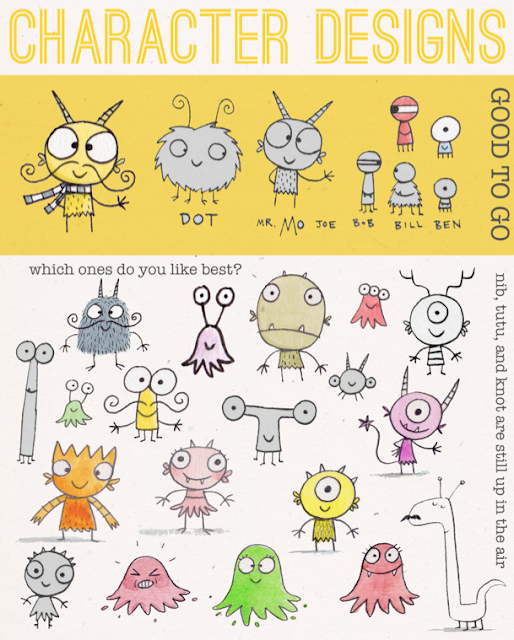 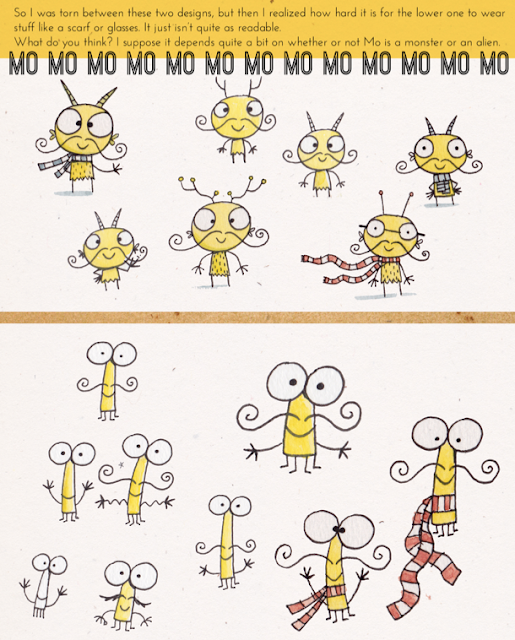 You'll notice in the above image that in my note to Tara I mention the question of what Mo is exactly. Alien? Monster? Thing? At first I wanted it to be ambiguous, but seeing as Meap is an alien . . . it seemed best to consider Mo a monster. Plus 'monster' starts with 'mo'!

Anywho, Tara and I ended up agreeing that I still had not found the right character design for Mo. So back to the drawing board! (I have such a tough job.) 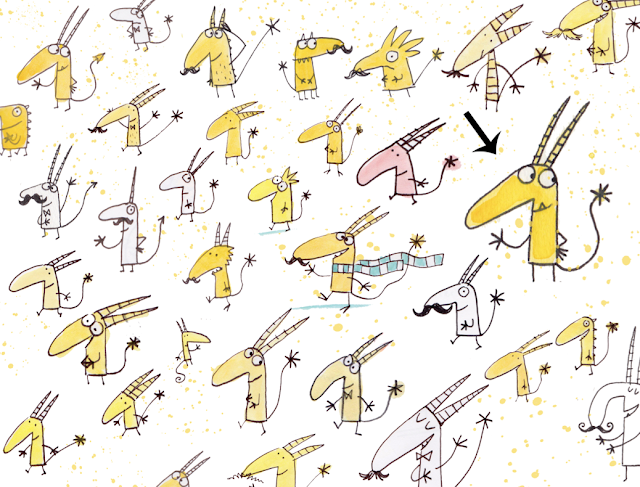 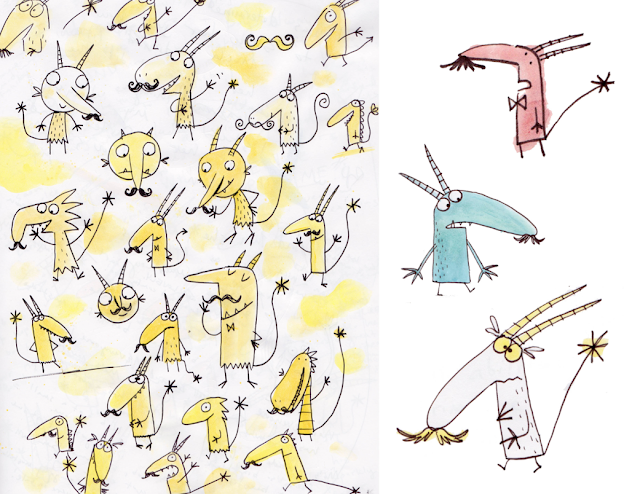 I tried out a really long nose for Mo, which emphasized his mustache in a way I really liked. After a bit more tinkering I finally had a design that everyone could agree upon. 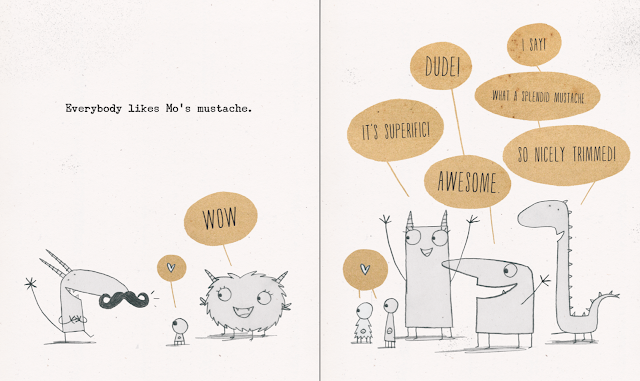 So I sketched up a new dummy book! 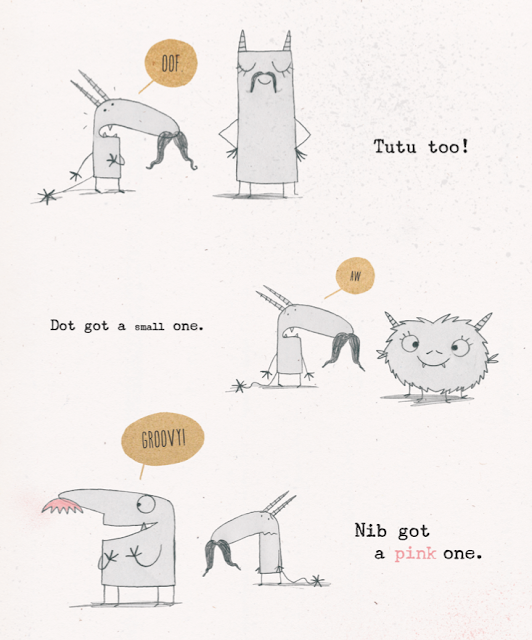 BUT after I had done that, we found Mo's tail a bit confusing as the knob at the end kind of looked like another hand. I tried out a number of different tails. Below is what I ended up sending Tara. 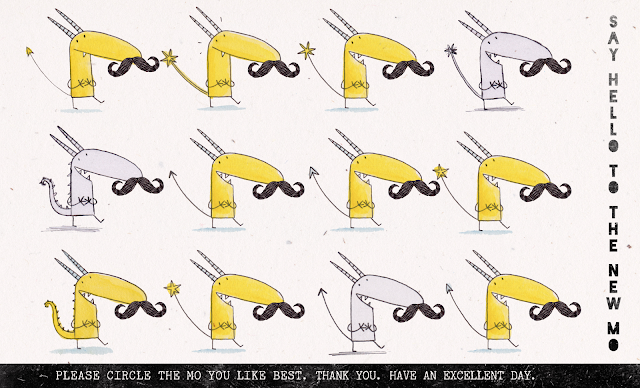 My favorite was the skinny tail with the six-pointed star knob at the end. I was inspired tails in the tale It Zwibble and the Greatest Clean-up Ever! . . . it was one of my favorite books growing up. The devil-ish tail was also a favorite of mine, but nostalgia won the day. 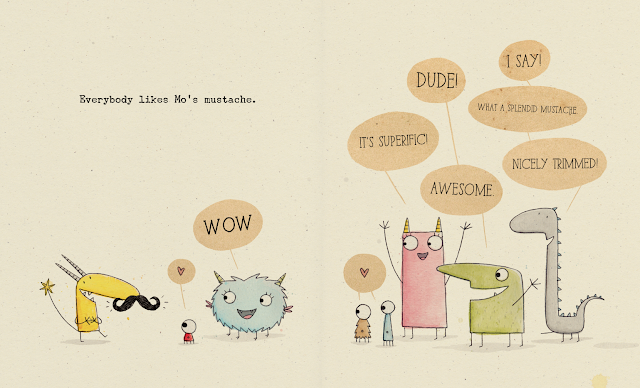 Wow! That made for a long-ish post and I still have more to share about some of the other character designs. Next Saturday! Enjoy your weekend and thanks for stopping by!
Posted by Ben Clanton
Labels: Doodles, Monster Monday, my books, Sketchbook Saturday
Newer Post Older Post Home