I'm it! Elizabeth Rose Stanton tagged me! And not only me but also Jennifer K. Mann (check out her blog tour post HERE). So apparently Beth is not only ridiculously talented as an artist (I might be a wee bit jealous of her knack for thinking of unusual and brilliant things) but is also quite fast. If you have not yet come across her book Henny then you are in for a treat. The book is funny, curious, and also quite sweet. It is just the sort of book I wish I had made.

.On to the questions!

What am I currently working on?

I am not so patiently awaiting the release of my next picture book REX WRECKS IT! which comes out at the end of September. It is about Gizmo the robot, Wild the monster, and Sprinkles the unibbit who all like to make fantastic creations out of blocks. And then there is Rex the t-rex. He wrecks EVERYTHING! I suppose I'm not currently working on the book itself but I am beginning to work on how to introduce Rex to the world. THAT requires a lot of work because (as previously mentioned) Rex wrecks EVERYTHING!!!

I am currently working on a number of projects. I'm just finishing illustrating the fourth Jasper John Dooley book which is called YOU'RE IN TROUBLE. Great title, yes?! It is my favorite of the JJD books. Caroline Adderson is an amazing writer.

I am also putting the final touches on a picture book I've been working on with Simon & Schuster called SOMETHING EXTRAORDINARY (set the bar rather high with that title).

AND I am starting on final illustrations for a second Max book by Wiley Blevins which involves an egg. It works out perfectly because baby ducklings are currently hatching in my studio!

That little guy on the right hatched today!

With a couple of projects coming to a close I am also now exploring a number of new book ideas. They involve such things as dragons, robots, pigs, narwhals, monkeys, and evil mutant potatoes.

Why do I write what I write?

I don't have a choice! Not that I want one. I have all these images and stories bouncing around my noggin trying to get out. My mind would explode if I didn't try to get them out somehow. And that is a scientific fact. It happened to a rhino named Marty. It wasn't pretty.

Also, I love to entertain kids! Doing school visits is the best. When I see kids laughing because of what I've written or when they ask questions about my characters or want me to draw pictures for them . . . it gives me a great feeling of satisfaction. It makes me want to keep doing this as often and for as long as I can.

How does my writing/illustrating process work?

1. I have a brilliant one-of-a-kind idea that I can't believe came to me. (Most of the time I eventually realize that the idea has either been done before or wasn't near as good as I originally thought.) These ideas can come anytime and anywhere. But for the most part I find them when out for walks, in the shower, or when procrastinating daydream-style.

2. I draw and write my idea out. I carry sketchbooks and pens with me ALWAYS. For me it is as necessary as having my license, keys, or pants . . . I fill up oodles of sketchbooks trying to work out the format for an idea, making notes about jokes I want to include, and mostly drawing the sort of character I want over and over again. I create little storyboards in my sketchbooks super quickly. It doesn't matter at this stage if it looks all that pretty. It just needs to get out.

3. I use Photoshop to compile sketches into a working dummy once I've fleshed out the character design, story sequence, and feel I want to go for. 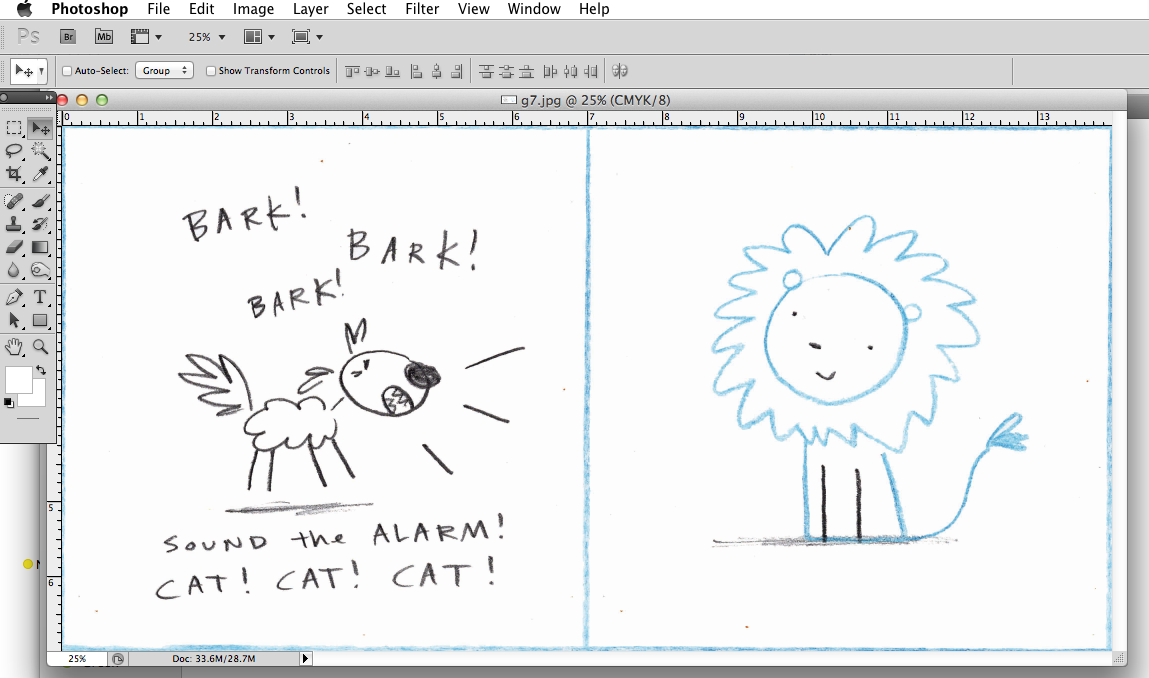 4. Time for an editor to take a look? (Fingers crossed!)

5. HOORAY! The book will be published with ____________. Now comes a bunch of back and forth and revisions. I'll usually end up doing a number of new dummy books. This is when Photoshop is most helpful for me. It allows me to quickly explore and create revised illos.

6. HOORAY! HOORAY! I finally have approval to do final art. WAIT! NO! I DON'T WANT TO DO FINAL ART! Final? Can't we talk more about all of this. Maybe somehow the final illustrations can do themselves. Okay, fine. I'm going to do this. Time to buy and borrow loads of audiobooks and get to it.

8. A final few revisions and then it is time to wait for proofs and then for pubication.

I'm afraid I'm not nearly as fast as Beth. But I have managed to tag one AMAZING person! Brooke Boynton Hughes. I believe someday that name will be a household name. She has a style that is truly hers and it is lovely. Her post will be up a week from now!

I'm also trying to tag Frank Dormer. The chase has just begun so I'm still hopeful, but even if I don't catch him . . . you should still check out his work. It is awesome.

And so are you! Thanks for stopping by!
Posted by Ben Clanton
Labels: my books
Newer Post Older Post Home